Feeling like I owed myself a break from fast-paced Bolivian capital of La Paz, and still with a week to kill before meeting my friend to head for the jungle, I decided to escape the Altiplano for some warmer weather 12 hours south-east, in the moderate climate of Cochabamba.

Armed with a highly recommended hostal, I took the cheap (~$5) bus the next day.

Cochabamba, in Bolivia’s Cercado Province, is set deep among a surround of mountains in the Cochabamba Valley and is famous for its ‘Cristo’, the world’s second largest statue of Jesus Christ (in case you were wondering, the largest is in Poland). My hostal recommendation, Cabañas Las Lilas, was a solid 45 minute walk from the centre of town so I grabbed the first taxi outside the bus station for the short drive there.

I wasn’t disappointed. In one of those funny coincidental twists that comes with travelling, I was greeted there by a bloke I’d served drinks to the previous week in at the Adventure Brew in La Paz. Drew was now working in this tranquil hostel outside the city, complete with swimming pool, a huge back yard, a movie room and even a treehouse! He was Australian too; I have since forgiven him for being South Australian.

The calm atmosphere of the hostal was an instant step down from what I’d been experiencing during my stay in La Paz. Here, each night, a small group of us watched a quiet movie and then gathered around the fireplace for a few quiet beers. As an added bonus, Alex, the hostal owner, cooked generous helpings at dinner time for an extra 30 Bolivianos (~$5AUS). If things weren’t relaxed enough already, Drew went on to explain that Alex also owned a local Spa, which we were welcome to use free of charge, and the beers we were drinking came from Alex’s micro-brewery!

I spent the next few days lazing by the pool reading books in hammocks, and even had the occasional (bad) kick of the footy – that’s an Aussie Rules footy, obviously. We also took one evening trip out to the spa, where most of us managed to indulge in massages as an optional extra, who said travelling was hard?

One of the highlights of my stay was an impromptu trip out to the Stiers micro-brewery itself, where myself and an enthusiastic Finnish guy named Eikka were treated to a free, entirely personal, two-hour tasting tour by the brewers: a Chileno and German duo. Micro-breweries like this one are still a rare occurrence in Bolivia, and it was a lucky opportunity not just to have an insight into the process, but the enthusiasm of the brewers themselves.

As my few days in Cochabamba drew to a close, I felt it necessary to drag myself out of my hammock and actually go and see the city itself. Luckily for me, three Aussie girls (two from Brisbane, one Sydney) had similar plans. The town itself has a resort feel, with several holiday apartments rising above the city centre. Milly, Georgie and Geri kept me laughing all day with tales of their six months studying in Colombia, before we posed inappropriately with the big Jesus himself.

Enjoy the photos (below) of this beautiful Bolivian town and be sure to look up Cabañas Las Lilas if you happen to drop by needing a place to relax, you won’t be disappointed! 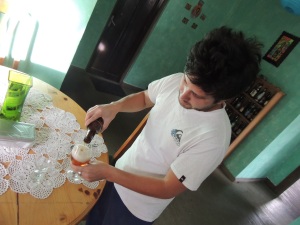 Testing the selection of beers.

Coming to a Dan Murphy’s near you?

Brewing vats at the Stiers brewery.

Big J sits atop the hill. 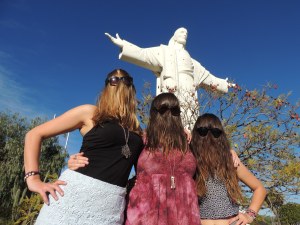 Having fun with Big Jesus in Cochabamba, Bolivia.

Millie and Georgie, two of the best Aussies in Cochabamba!