La Paz is Bolivia’s bustling capital, instantly recognisable from its unusual bowl shape and arrangement of homes rising up steep hillsides surrounding the town to the altiplano. It carries the distinction of being the highest capital city in the world, at an elevation of 3,650 metres above sea level. The city centre itself is located at a lower altitude (around 3,200 metres) and is broken into several smaller districts, some noticabely wealthier than others. Arriving in the city can require some acclimatisation, with the difficult combination of steep hills and high altitude many people find the first few days here hard work!

Although La Paz has a reputation for a higher crime rate than other South American capitals, I can honestly say I felt as safe here as I have anywhere else on my travels. This is of course still taking care to be sensible, watch my belongings and keep an eye out for anyone behaving suspiciously. This can include anyone from ordinary people on the streets, to taxi drivers and police officers.

After spending the best part of the last five weeks in the Bolivian capital of La Paz, I have been torturing myself on how I can fit all of my amazing experiences there in to one post. In reality, I can’t. Instead I have narrowed things down to a short list (in no particular order) of my favourite parts, places and features of my favourite city in South America thus far. Enjoy!

This part of the city is set upon the altiplano at an elevation of roughly 4,100 metres. Historically, this area is seen to be more disadvantaged and the poorer residents of the city tend to dwell here. However, it is still totally accessible to Bolivians and tourists alike, just a short minibus (or trufi) ride from the city centre. Each Thursday and Sunday, El Alto transforms into what is rumored to be one of the largest open markets on the continent, certainly in Bolivia! Anything can be found here, and I mean anything. Television remote controls, car tyres, electronics, second hand clothes (just a dollar a piece!) and all the Bolivian cuisine you can imagine. I went back here three times during my few weeks in La Paz and found a new part of the market each time, it simply seems never-ending! 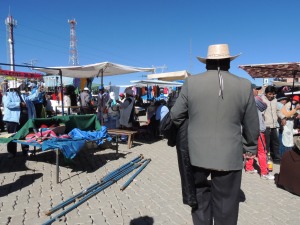 A Bolivian man walks through the El Alto markets.

The heart of the city, La Paz’s main plaza is bathed in glorious sunshine (most of the time) and hosts daily attactions, day and night. Crowds in excess of 200 people gather here on the steps most nights to laugh and cheer for improvised street comedy shows. Local shoe-shiners masked in balaclavas offer their services and Caseras sit in their small hastily built stalls selling delicious street food. In each direction from the Plaza itself, steep streets are lined with Artesanal shops, giving the gringos their fix of llama wool jumpers and scarves. The ‘Witches Market’, just a short walk up the hill, sells various concoctions promising hallucinogenic results and an array of rather unnerving dead baby llama foetuses… nice.

Almost every day that I spent in La Paz, I frequented the 3rd level of the Mercado Lanza (next to Plaza San Francisco) where I was greeted by my favourite casera and could enjoy an amazing two course lunch for just 8 Bolivianos (1 Dollar!). Each day the soup would usually consist of some rice, some varieties of potato and the obligatory chicken foot. For second course? More rice, more potato and perhaps some chicken of beef. This filling meal was always accompanied with some variety of spicy chilli sauce and always tasted amazing. If I was feeling particulary extravagant, fresh fruit smoothies were on offer for another 50c. The caseras also value loyalty over anything else, so the more I returned and the more people I took back there each day, the more special treatment I recieved! The market was also a great place to purchase cheap toiletries and English/Spanish books at a fraction of the cost that they could be found elsewhere in the city.

My favourite Caseritas in Mercado Lanza!

Free bed. Free beer. Free food. They had me at ‘Hello’, or rather… ‘Free’. Taking a couple of weeks out to work at the hostel I was staying at didn’t just prove to ease pressure on my budget, it turned out to be a whole lot of fun too! Working with a similar group of people in a steady environment  was certainly a change of pace from what I had become accustomed to over the past few months. The Adventure Brew Hostel (and neighbouring B&B) are big, but friendly and relaxed hostels. They both have their own bars that serve some of the only draught beer to be found in La Paz, from the Saya brewery. Staying here, free of charge, for such an extended period of time also allowed me to get to know the city as well as I did, something I am very happy to have had the opportunity to do. 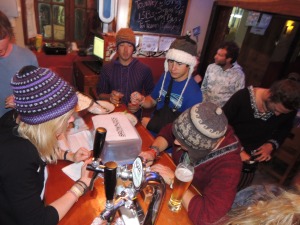 I couldn’t bring myself to write this post without mentioning the Trufis (otherwise known as minibuses) that thunder through downtown La Paz and into its outer suburbs. Built to seat 12 people including the driver, but often carrying more, these independently owned, flourescently advertised vehicles travel along designated routes ofeering passage for as little as 1 Boliviano. If you’re unlucky enough to be sitting at the very back, after shouting at your driver to stop for you, four people then have to climb out to let you out! Riding these exciting contraptions around the city and happily chatting to commuting Bolivians was one of the highlights of my stay in the city, I recommend you try them too! 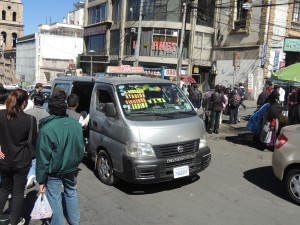 A Trufi toots its way through the streets of downtown La Paz.

The size of Bolivia means that many of its other cities are very accessible and often no more than an overnight bus away from La Paz, sometimes even closer. Beautiful towns like Potosi and Sucre, or Copacabana on Lake Titicaca, can be reached at super budget friendly prices – as little as $4 for a 12-hour bus ride.

Bolivia, similarly to Chile, does boast super cheap bus travel. Unlike Chile however, buses can range from uncomfortable to outright dangerous. It is important to try and book with a company you have heard good things about (El Dorado have been good in my experience so far), and try and look at the bus before you buy the ticket to check the tyre tread and windows for large cracks. It is also advisable to make sure you see your bag make it on to the bus to avoid any nasty surprises at the other end. Oh, and expect to be sitting in front of a chicken or a sheep, that’s normal.