A stunning sunset from our cargo boat over the Rio Mamoré, Bolivia.

You all know about my obsession by now about getting away from those pesky tourists, right? Eager to keep the trend running, I set about convicing Emily to accompany me the long way to the Bolivian Jungle. Instead of taking a 45 minute plane from La Paz (TAM $80USD return) or a bumpy, toiletless 30 hour horror bus ride (just $5!) I assured her there was a better way. ‘Why go 30 hours to Rurrenabaque when we could take a 30 hour bus here instead’, I implored, finger pointing at the small, barely scrutable town of Trinidad in Bolivia’s eastern jungle region. These plans had begun forming in my mind a couple of weeks prior in Cochabamba when a Finnish, Kid Rock-esque intrepid-jungle-nutcase had told me of his plans to take a boat north, with just his hammock for company. With a little more research online it appeared that the idea was totally feasible and, sensing adventure, I was keen to give it a try. Without much convincing needed, I had the attention-attracting British blonde on board, and we hurried up to the La Paz bus terminal to book our tickets to Trinidad. We were unsurprised to find that there was no direct bus, meaning we would be going via Bolivia’s largest (and later we found, possibly most uninteresting) city, Santa Cruz, for a 12-hour stop-over. Within an hour, both our bags and us were both safely on the next bus – a cruisy 16-hour overnight stint into Bolivia’s south eastern tropical region.

Our staple diet during our wait in Trinidad.

As aforementioned, our stop in Santa Cruz was uneventful. It held little more excitement than possibly the most drawn-out banana milk in history, as we attempted to break the record for how tight you can be with free wi-fi. When 8:30pm finally crawled around we were relieved to be ensconced comfortably in our seats for the remaining 12 hours overnight to Trinidad. The relief didn’t last long, however, when Emily discovered a friendly cockroach on the windowsill. And then another one. And another one. Adding to our misery, the bus ride was by no means an easy one. Unsealed roads, zero toilet stops and ever increasing tropical temperatures tested every inch of our patience as our bus driver (obviously an avid Michael Schumacher fan) risked our lives into the night. Incidentally, the only stop we made was to get more coca leaves, to keep our driver awake! Having said all of that, we were rewarded for our patience with yet another facet of Bolivia’s incredibly diverse and seemingly never ending landscapes. As the sun peeked through the curtains into the hot, damp bus we gazed out at orange dust-covered villages sprouting banana trees and shoeless infants riding shotgun on motorcycles. I marvelled at how, in just a few short hours of separation by simple dirt road, people and their lives are completely changed, entirely apart from one another. Embracing the slight breeze and hot jungle sun, we strolled into Trinidad. Perched on the southern edge of the Amazon basin, many tributaries of the Amazon River run past the town of 130,000. Having read that Trinidad was the city of motorcycles, I had a fair idea of what I could expect. However, nothing was to prepare me for this. Hundreds upon hundreds of two-wheeled contraptions roared through the dusty streets, packing up to five people on at a time. Cars were all but non-existent. We found a relatively well-priced hotel, dropped our bags and took long awaited showers.

The beautiful church in Trinidad’s main square, and a few motorbikes!

According to my information, the place to enquire about boats heading north alonng the Rio Mamoré was at the nearest port, Puerto Almacen. We flagged a moto-taxi down in the main square and took a ride out there to see what was on offer.  To cut a long story short, we spent the afternoon adventuring not to just Puerto Almacen, but the next one, and the next one. Although an adventure, crossing the river on a wooden barge with our newly-hired moto-taxi man proved entirely fruitless. We returned to town that evening worn out, 100 Bolivianos lighter and no closer to finding our boat.

Thankfully, the next day brought us better luck. Making the trip again to Puerto Almacen, we found that the cargo boat Don Fidel was leaving four days hence, on Tuesday. Emily’s fluent Spanish and short shorts secured us a handshake with the Capitan for five days passage north along the Rio Mamoré to Brazilian border town Guayaramerin, including sleeping and food. With three nights to kill in sleepy, beautiful Trinidad we set about organising ourselves – admittedly we also drank a lot of beer and ate a lot of food. At one stage we even found the most horrendous hostel room in South America. Aside from that, life wasn’t hard as we lounged in restuarants on the plaza watching endless motorcycles cruise by. Drinking water, tick. Hammocks, tick. Mosquito nets, tick. Other impulse purchases, tick. We excitedly boarded our cargo boat,  Don Fidel on Tuesday evening, after being informed that a missing document would be holding us at port until tomorrow morning but we were welcome to stay. So, on Bolivian time, the ‘document’ made it’s way to the port. Tuesday and Wednesday ticked by before we were joined by a friendly, shrugging American called Kyle. The Capitan told him that Americans were bad for Bolivia but thankfully still let him join us on board the boat. So then there were three. Thursday slipped by and even the Capitan appeared to lose faith. Finally, late on Friday, a motorbike pulled up on the bank and a small Bolivian man clambered aboard waving a non-descript piece of paper. We were off!

Thus began boat life. The engine thundered into a steady rhythm as the sun sank behind the river for another picture-perfect sunset and we settled into our hammocks, happy to finally be moving. For the next three days our lives were stress free – waking to watch the sunrise each morning from our hammocks through the gauze of our mosquiteroes, being summoned to feasts for breakfast, lunch and dinner and passing the hours reading or sunbathing on top of 500,000 litres of gasoline. We became close friends with Kyle, and the three of us chatted amiably to the crew. Days passed by, occasionally interrupted by locals living in isolated river communities driving their small boats up to ours, with bananas or fresh fish for trade.

The width of the Rio Mamoré itself was astonishing and the countless curves seemed never ending as the boat gracefully made large sweeps of the murky brown expanse, occasionally signalling to small communties or other boats. Experiences like these give you a true sense of the sheer size of these incredible places – the justification that they do exist. I felt like I was in a National Geographic magazine as we cruised through this incredible untouched wilderness. As an added bonus, every night offered a new, awe-inspiring sunset reflected off the glass-like surface of the water. 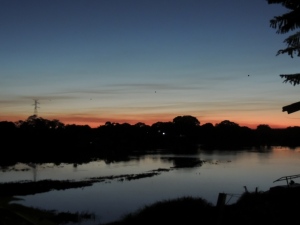 Our solace was to be broken on day four, when we made a much anticipated stop in a small river community (‘Podemos comprar cervezas? Si? Que bueno!!’). A further five Bolivians squeezed into our space, among them a family with a mother and her two children. Kyle stopped thinking the little 3 year-old boy was cute rather quickly, after using Kyle’s leg as a toilet and giggling hysterically over it. I thought it was pretty funny, too. Although crowded, the new passengers made for some interesting conversation, especially the drug-dealing, cock-fighting Brazillian who tested my hammock to its limits.

Hammocks have feelings too!

Early on Tuesday morning we woke up to the shuffling of belongings and light cargo and the strange sight of a small pocket of civilisation – the border towns of Guayaramerin (Bolivia) and Guajara-Mirim (Brasil). The Capitan was eager to get us off the boat and unload his cargo, but not before we could manage to pose with the whole crew. I turned to Emily, ‘Don’t worry, just another 14 hour bus ride to our next stop, Santa Rosa!’

Enjoy the rest of the photos from this amazing trip below.

Want to klnow how I did it? Get in touch by clicking here or in the comment section below. 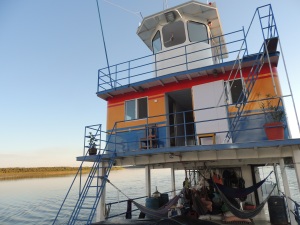 Looking back on Don Fidel.

Our first night on board the cargo boat.

Kyle prepares some aloe vera for the impending sunburn. 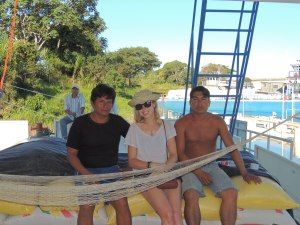 Emily makes in-roads with the crew! 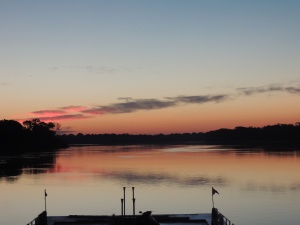 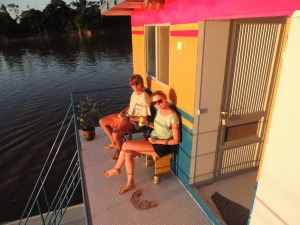 Beers on the captain’s deck!

The Capitan, hard at work. 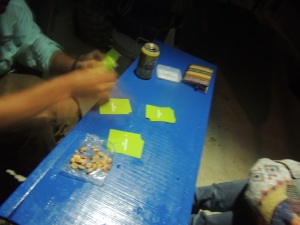 Saying goodbye to the captain and crew.