Workers grind along the dusty Carretera Austral as I wait for a ride, early on Saturday morning.

During the last two days my journey south has hit some unexpected lows and some amazing highs. I caught a cheap, early bus from Futaleufú at 6am on Saturday morning that took me back to the main road south, the Carratera Austral. I ended up standing just south of the small, uneventful town of Villa Santa Lucia with my thumb out hoping to make it to Coyhaique that day. Unfortunately that wasn’t meant to be.

I stood on the dusty roadside, in what is probably the blandest town in Patagonia, for 11 long, hard, patient hours. It doesn’t sound like much when you read it but, seriously, eleven hours. Imagine what you could do with that much time. Even Facebook was out of the question as I considered the very low probability of the nearest wooden street sign transmitting a Wifi signal. Instead I invented several new games, the most exciting of them involved drawing a big circle in the dust and sitting at the roadside seeing how many stones I could throw into it – incidentally I set the new world record. That’s how bored I was.

In hindsight, the hours passed unusually quickly as I listened to my iPod and watched hundreds of heavy vehicles pass and spit up gravel in every direction. Very few people were actually heading south, which didn’t help my cause, but even those who were didn’t stop. At about 5pm I briefly shared some biscuits with a cyclist named Amy, from Utah, who was also making her way south. Despite our best efforts, even a cute female in lycra couldn’t encourage the male drivers to pull over. Amy continued heading south, keen to make the last 30km to the campsite before dark, I sat back down on the roadside.

My campsite for the night

As the sun disappeared behind the mountain, I decided I was within 30mins of finding an unofficial camping spot near the road. As a dusty red ute rolled down the side road and indicated left, I made a last-ditch attempt to at least secure a good campsite. Resurrecting my hitchhiker’s prayer motion from last week, I threw my hands and thumbs above my head and put on the most anguished face imaginable (‘Por favor’ is harder to mouth than ‘Please’!). Once again, magically, my prayers were answered as the driver reluctantly ground to a halt. ‘Donde vas?’, he enquired gruffly, ‘Sur! Lugar de camping por favor!‘ I responded desperately. He motioned for his son to undo the tarp and I threw my backpack in the back, climbing in. Quite unnervingly, after 40 minutes of bumpy gravel road and silence, we ground to a halt. When I motioned to the campsite on my map, the man seemed to have no idea where we were. Not ideal. Thankfully I walked 5 minutes further down the road and stumbled across a small town, where a lovely lady allowed me to set up my tent in her front yard. That night I enjoyed a gourmet feast of bread, cheese, ham, peanuts and chocolate biscuits washed down with a litre of wine (straight from the cask). Suffice to say, me and the 100 mosquitoes keeping me company in my tent slept soundly that night.

I was woken at 4am to the sound of an enthusiastic pair of cockerels and heavy rain, I slept on and off until around 9am when the rain had eased enough for me to peel the slug off my front door zip and organise my things.

As soon as I was back on the road, my luck finally turned. The first car stopped and gave me a ride 40km to the quaint town of La Junta where I bought breakfast, acquired a new map and wandered to the town’s south exit. From there I waited just 2 hours under some shelter before a white pickup truck pulled to a halt. Little did I know that my fortunes were about to increase dramatically…

I tentatively explained that I would be happy with a ride to nearby Puyuhuapi (just 40km further) and the man agreed that he was going in that direction. I ran back to grab my bags, threw them on the back seat and climbed into the passenger seat. It was only after some small talk that I realised the man, Edgardo, was actually driving all the way to Coyhaique, over 400km away. As the realisation of my amazing fortune dawned on me, I politely asked if I may share the ride the entire way. Luck shone down on me as Edgardo agreed, and I settled in for the journey.

Distance is decieving in this part of South America. The nature of the roads, especially in the wet, make 400km a six hour journey. This is offset by the incredible landscapes that Patagonia has to offer: a seemly never ending vista of towering glacier capped mountains, beset with countless waterfalls raining from the heavens into the glass-like lakes below. The road is carved into mountainsides through deep national park forest while bridges cross vast rivers and tunnels bore deep under the earth. The incredible views, coupled with the satisfaction of a free ride south, rid me of any disappointment the previous day had brought. 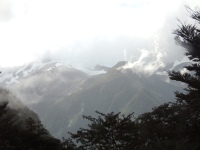 Edgardo and I chatted casually, he modified his Spanish and spoke slowly and carefully so I could understand. I learned that he lived in Palena, just south of Futaleufú, and was heading south for a business meeting the next day. We talked about family, my vacation and what Australia is like. 4 hours into the winding, bumpy journey, we paused in a small town where on of Edgardo’s friends owns a small restaurant. This kind man even insisted on buying me a delicious lunch, and wouldn’t take no for an answer.

We parted in the centre of town, after Edgardo insisted on showing me where the bank and plaza were located. We shared contact details and I promised to link him in with this post via email. He is yet another Chilean person I have to thank for his true kindness and hospitality, of which there has been so much on this journey so far.

I continue south tomorrow, perhaps crossing in to Argentina in the next few days, or completing the last 636km of the Carretera Austral to Villa O’Higgins… Who knows!

Edgardo: The man, the myth, the legend.