After resting in Chaitén for an extra night to shake off an annoying cold, I caught a cheap ($2000CHP, $4AUD) bus 151km south-east to the small town of Futaleufú. It is a tourist hotspot during the high season, averaging around 5000 people in January and February attracted by its white-water rafting, kayaking and natural beauty. It sits just 8km from the Argentinian border, about which I would learn more when I took a short three-hour trek around nearby Reserva Nacional Futaleufú, overlooking the river popular for extreme water sports.

About an hour and a half into my walk, and having gone slightly astray of the marked trail, I was approached by two officials and a Chilean farmer. Apparently I had inadvertently come very close to the Chile-Argentina border, about a kilometre and a half south of the official crossing point. Suffice to say, I was in a little bit of trouble. With some hasty Spanish apologies I was promptly turned around and marched back into Chile!

Here are some photos from the National Reserve, see if you can spot where Chile becomes Argentina – I obviously couldn't! 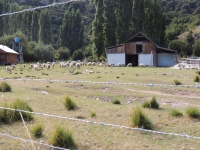 Near the point where I inadvertently crossed the border!

I was toying with the idea of crossing into Argentina (officially) tomorrow to head south, but instead I am going to continue hitchhiking down the Carretera Austral. Tomorrow I am giving myself the whole day to make the whole 420km trip to Coyhaique. Let's hope for sunshine and friendly Chilean drivers!
Nos vemos,
Teddy.