The aeroplane was a little more comfortable than expected...

So, in my launch post I said that I didn't think things would go according to plan.

I couldn't have been more right.

Up until 4:00pm yesterday everything was going beautifully. My bags were packed, I was happy that I hadn't taken too much, a friend got me to the airport in good time, my dad even bought me two pints! I checked in at the Virgin Domestic Terminal in Melbourne with no hassle and made my way to Gate 5 for the 4pm departure.

I'm not the sort of person to get stressed too easily, I generally take things as they come. After all, my philosophy is that if your plane is delayed there isn't much you can do about it, so why worry?

I smiled politely at the pretty girl behind the gate desk (who wasn't taking my philosophy on not getting stressed too well) and said, “Excuse me, but my connecting flight to Buenos Aires is at 7:30pm from the Sydney International Terminal, do you think everything will be okay?”. She reassured me that the flight had been rescheduled, and would be leaving at 4:30pm, perhaps cutting it a bit fine but unlikely to be disastrous.

Seizing the opportunity that an extra 30 minutes in Melbourne presented, I did what any sane person would do and made a new best friend. He also happened to be doing wine tastings next to the gate. Score.

30 minutes later, with a slightly frazzled (and tipsy) auntie in tow, we boarded our flight to Sydney. Considering the delay meant that complimentary beer would be served on the domestic flight, I was far too distracted to notice our departure from Melbourne was pushing 5pm. Anyway, they had my bag in the plane now – what could go wrong?

After a rushed goodbye with the aunt, I joined the thirty or so other passengers in the terminal shuttle bus lounge. Apart from one nice Chilean guy, the people surrounding me seemed to be conspiring against me to show off how bad my Spanish knowledge actually was. It was like sitting in a washing machine as I strained to pick up at least one familiar word. I didn't.

“The bus is here!”, shouted another smartly dressed Virgin employee. Why is her voice pitch so unusually high? I wondered. And why are these silly people running? Don't they know that Aerolineas Argentinas have our bags? That plane won't be going anywhere.

I guess letting the nice Chilean guy go before me in the check-in queue was the right thing to do. I might not have been so kind had I known that me and the guy standing behind me – a musician from Melbourne called Alex who I have now shared three free hotel meals with – would alas, not be getting on the plane.

“All airlines overbook their seats”, the QANTAS lady replacing the Aerolineas Argentinas staff calmly explained. “Don't worry, we will book you in to the Sydney Mercure Airport hotel and dinner is on the airline”. “And breakfast”, I piped up. “And lunch”, Alex chipped in.

The drama didn't end there, fifteen hours later I'm sitting here waiting for a call back from baggage services to see if they've located our bags yet. 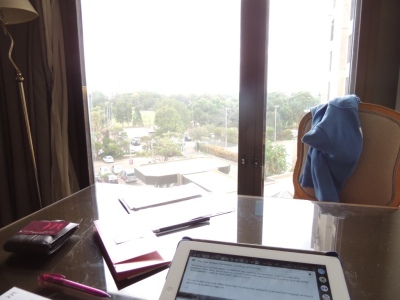 Oh, what an adventure!