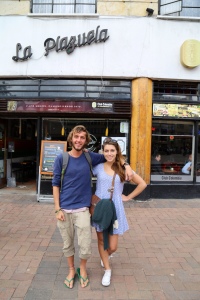 The Aussie girls had to put up with me again!

Zipaquirá is a pleasant colonial town two hours from Bogotá’s city centre by public transport (see below). Twenty minutes walking distance from the small town centre is a rock salt mine that has been producing salt for centuries. In 1995 the new Salt Cathedral was opened after the original (built in 1954) was closed due to unsafe deterioration and quickly became one of Colombia’s biggest tourist attractions. The guided tour (Spanish, included in the $22,000COP, $11AUD entrance price) first leads past the 14 stations of the cross, each sculpted into deep tunnels by different artists, and then descends up to 180 metres below the surface via various passageways to the Nave, an immense structure supported by glistening walls of dark salt.

Each of the various tunnels, stairways and domes are lilluminated with coloured LED’s, giving the cathedral impressive character. Huge crosses and sculptures of religious figures adorn walls and caverns, some arranged to portray different scenes. I was lucky enough to be in the company of the two cool Aussie chicks, of whom I must give Cookie credit for her superb photography with her gigantic camera.

Getting to Zipaquirá from Bogotá:

Enjoy the photos from this beautiful attraction below. 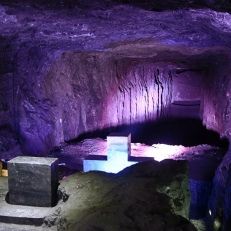 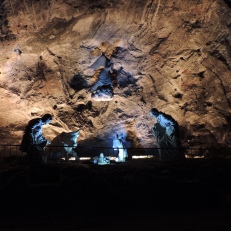 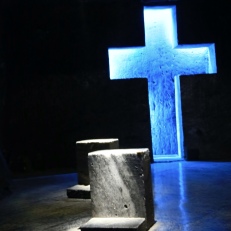 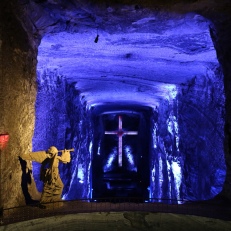 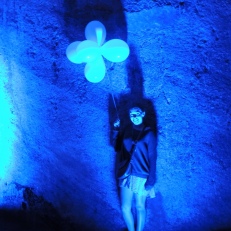 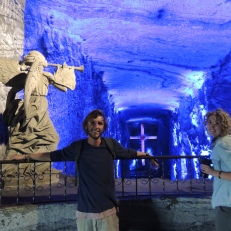 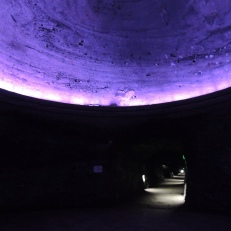 One response to “In Pictures: Visiting Zipaquirá’s Catedral de Sal”