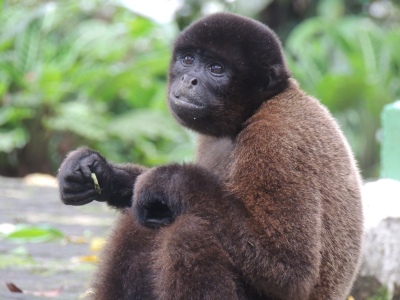 My best friend in Misahuallí, Pepito the monkey.

If I had two words to describe Misahuallí in eastern Ecuador, they would be ‘wow’ and, uh, ‘wow’. It took two separate buses and one 30 minute ride in the back of a pick up truck to make it there, and it was worth every humid, cramped, sweaty moment.

I caught up with Dusty and Justine just briefly before getting a late afternoon bus to Tena, around five hours ($5USD) from Baños. Yet another concoction of panpipes and drums, a song I’ve probably heard a thousand times before, blared from the speakers above our heads and drowning out the rush of hot wind blasting in through every open window. The Ecuadorian sitting next to me stared politely at my strange clothes and homeless beard, at this stage of my trip I think the professional version of me has been left somewhere quite distant.

The picturesque Cascadas las Latas, 20 minutes by bus from Misahuallí and perfect to cool off in!

The bus ride itself was insanely beautiful, as rolling mountain roads gave us a view stretching across the top of the canopy, backed by mountains and a slowly setting sun. Even the awful music couldn’t spoil my mood as we screeched through tiny villages with barbecues smoking on every street corner, bananas abundant on every footpath. The sun turned a deep yellow, followed by a magnificent orange before finally dipping behind the horizon.

The plan was to take the final bus from Tena to Misahuallí, a surprisingly regular hourly service considering the remoteness of these jungle-edge towns. Having said that, Ecuador’s infrastructure is superb, and makes remote bus rides significantly shorter than those in Bolivia and considerably more comfortable. After half an hour of waiting, one Ecuadorian flagged down a taxi pick-up truck and shouted that passage would be a dollar each – first on board, first to go. Naturally, I used my backpack’s hammock attachment to knock several old ladies to the ground and jumped up into the tray.

Karma caught up with me when I was dropped off in Misahuallí’s quiet plaza half an hour later. I glanced at the 100 metres suspension bridge that I’d be crossing on foot, in the dark, and swallowed hard. Clutching my knife in my pocket, thus ensued five minutes of terror. My hostal was a further 200 metres walk up the quiet road, thankfully partially lit by the moon above. My tip for accommodation in Misahuallí is Banana Lodge, which is the place I moved to the following evening, with friendly owners, comfortable cabins ($8USD) and even wifi!

Below are the details of what I got up to during my short stay in this beautiful part of the world, along with some small picture galleries. If you can afford the time, Misahuallí has a whole lot more to offer, including night time jungle walks and river tubing. It is a place that I recommend unreservedly, one of my favourite experiences so far.

My first stop was the Latas Waterfalls, a 20 minute bus ride from the plaza in Misahuallí, departing roughly once an hour. A 45-minute walk over slippery rainforest track alongside a small river leads you to these beautiful secluded falls where you can swim, relax, read, actually you can do whatever you want, nobody is watching. There is a host of wildlife to enjoy along the track including an array of birds and gigantic insects. 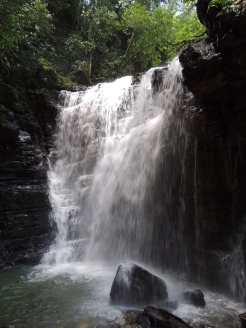 The road back to Misahuallí on the return bus includes a small butterfly farm, or Mariposario, just next door to the school. For a small entrance fee (~$2USD) the owner demonstrates how a variety of species metamorphose from larvae, through each development stage into huge jungle butterflies. He also had an extensive collection of huge bugs that he finds in the plaza, stunned by the electric lights, and collects them to stop the monkeys from eating them and dying. Whatta guy!

I was the only person at the Isla de los Monos (Monkey Island) about 25 minutes from Tena the following day. I took my backpack into Tena, politely asked at a hostel whether I could leave my bag there for the day, and made a day trip out of town before catching the night bus to Latacunga. I had hundreds of squirrel monkeys to myself, but the stand out character was Pepito (pictured above and below) who refused to let me go!

Finally, some pictures from the tiny jungle town itself, Misahuallí.