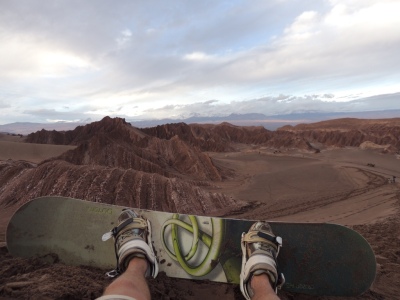 The view from the sand dunes, overlooking the Atacama Desert.

The swampy streets of San Pedro!

According to Wikipedia, San Pedro De Atacama is the driest desert in the world and receives just 0.004 inches of rainfall each year – or 4 inches of rain every 100 years. I had crossed back in to the far north of vast, stretching Chile to make one final stop before making my way up into Bolivia. To everyone's amazement, for the first two days of our stay we experienced a steady two days of constant drizzle. Locals stood outside their houses and stores, palms facing upwards, gazing into the heavens. Buildings, not constructed for rainfall, leaked a steady stream of water through cracks and light fittings and the power in the town was intermittently switched on and off. Decades worth of dust caught on the corrugated iron rooftops turned to orange streaks of mud, striping down the sides of the whitewashed buildings and the dirt roads morphed into a swampy, muddy quagmire for pedestrians and the few vehicles that continued to use them.

It was these two initial days of madness that set the tone for my week in San Pedro. In addition, it was a Chilean long-weekend meaning that every hostal was bursting at the seams, desperately patching up leaks and keeping beds dry. If this wasn't enough, heavy snowfall in the north meant that the Bolivian border was closed. In short, if you were in San Pedro, you were staying in San Pedro.

Looking down into Death Valley from the Pre-Incan fortress.

The small town's proximity to activities and sightseeing including salt lagunas, sand dunes and pre-Incan ruins make it a tourist hot-spot. The tours on offer are relatively fairly priced, and my small budget still stretched to an awesome afternoon of sandboarding, followed by a stunning sunset over the Valle de la Luna (Valley of the Moon), so named for its striking appearance dotted with craters and boulders. The small courtyard at Hostelling International made for a friendly atmosphere and it was easy to meet others quickly and get chatting. I met Kelsey (Canada), Renée (NZ) and Zoe (Ireland). With little to do in the pouring rain, we resolved to some $2 per litre wine tasting instead (unusual, I know). A sudden burst of enthusiasm came when the rain held off slightly, and we decided to walk out to the Pukara de Quitor pre-Incan ruins, just 3km from town. Just as we arrived, the ruins were closing and despite our best efforts we were chased off the premises by a rather angry Chilean with a loudspeaker. No sooner had we started the 3km walk back to town, the rain returned! Luckily our trip was made shorter, but not any less cold and wet, by a friendly man with a pick-up truck.

Hiring a tandem bicycle, a great idea at the time...

When the sun finally bore down on San Pedro again the following morning, Kelsey and I decided to take a bike ride out to the nearby attractions. Despite our best efforts, we couldn't find a bike for each of us. The only option, strangely not taken up by anyone else, was a tandem bike. It turned out that most of the fitness we gained that afternoon came from laughter. Neither of us had ridden a tandem before (which is much harder than it looks) and to make matters worse, although the rain had stopped the roads were still 4 inches in thick mud. Considering our mode of transport, we decided to take the short ride option of a 6km round trip to see the ruins properly this time. People literally stood and stared in the small streets as we routinely tried to get the bike moving and out of town. After about 20 minutes of embarrassing stop-starts and near-misses we finally had the hang of it and were cruising along to the encouragement of deadmau5 and amused locals. One-river crossing later, we rolled up to the front gates of the ruins and … BANG! Our rear tyre exploded into several pieces of shredded rubber!

Thankfully, nobody wanted to steal a useless tandem bike so we parked it out the front and climbed the pre-Incan steps of the Pukara. The views of the town and surrounding desert were stunning, which I have become used to in beautiful Chile. The vast dry expanse was backed by snow-capped mountains and volcanoes, while the other mirador looked down into Death Valley. We were also treated to a close-up view of what remained of the Incan fortress that stood in place over 500 years ago. Thanks to another friendly pick-up truck driver, getting the bike back to town was much less difficult than it could have been and we were even spared another river crossing. 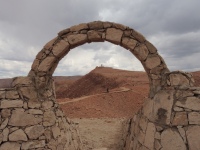 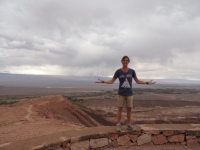 The public holiday meant that plenty of Chileans had made a trip north for a weekend break and we enjoyed a couple of evenings mixing with the locals and enjoying the nightlife. As there were a few of us planning to head north into Bolivia we arranged to take a three day tour across the border, finishing at the world's largest salt lakes in Uyuni. Keep an eye out for the next featured post detailing our amazing adventure north, and enjoy the photos from my time in beautiful San Pedro.

Sandboarding and the sunset over the Valle de la Luna: 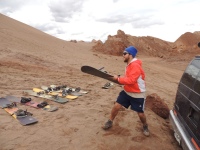 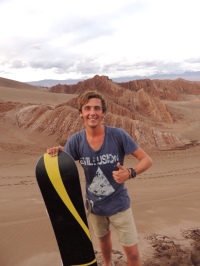 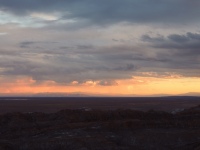 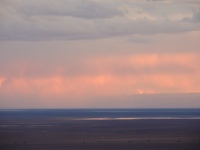