I woke up early to thank my Couchsurfing host, Facko, who had put me up for two rather cerveza filled nights in Ushuaia. Nursing my sore head, I packed the last of my things and walked down to the port to catch my last Patagonian sunrise. One thing I have learned on this trip is that I must always live in the moment, because things pass us by if we don't take a step back to appreciate them. Looking back over old blog posts fills me with a sense of nostalgia as I relive some of the incredible parts of my journey so far. A popular hostel question is, 'What's the best thing you've seen on your trip?', one that is almost always unanswerable for many people, including myself. The past two months in Patagonia had offered innumerable experiences, places and people: hitchhiking the Carretera Austral, trekking through vast national parks including Argentina's El Chalten and the magnificent Torres Del Paine of Chile and of course the people who I had shared these moments with along the way. I just couldn't pick one.

I was full of excitement to be returning to a huge city like Buenos Aires. For a period of any longer than two months, I'm not a country person. I always find myself saying 'I wouldn't live here!' even when the city is just two hours away. I ultimately long for the big city culture, the variety, the ease of access, the nightlife and the people. Although I was leaving Patagonia with a twinge of sadness, I knew that Argentina's capital would begin another chapter in my journey. The dear old lady sitting next to me on the plane must have sensed my emotional state, as she kindly donated her entire lunch to me. I love old people.

Apart from eating myself silly on the plane (some of the best advice I ever received as a student was 'never turn down free food') the flight was thankfully uneventful. As the tiny jet touched down at Jorge Newberry Domestic Airport the passengers burst into a thunderous round of applause – making me question whether I should have been nervous after all. After trading a coffee for some free wifi and smiling sweetly at tourist information I jumped on bus 37 to Plaza Italia in Barrio Palermo, a quieter part of the city by day, just east of Centro. The driver looked at me quizzically as I thrust a 2 peso note towards him and explained that I had to pay with coins. Coins that I did not have. Using my Latin American sense, I sat down at the front of the bus anyway and we rattled towards my destination. Other than a few sideward glances, nothing more was said, and as we pulled up I apologised and promised to pay double tomorrow. He shrugged.

It turned out that I had picked a beauty of a place to stay, Hostal Suites Palermo, and I quickly met several other city dwelling travelers. Among them was Kevin, a cool-dad kind of guy who had sold his business in the states to ride around the continent on a motorbike. Somewhere near Aluminé in south-west Argentina, Kevin had caught a bee with his helmet. The bee, not being all too happy about this, decided to show Kevin how it felt by stinging him repeatedly in the ear. As you can imagine, controlling a fully loaded motorbike on a dirt road while being surprised by an angry bee is a near impossible task. This explained Kevin's broken arm and broken leg (on opposite sides of his body) and his reason for hanging around in the city for a couple of extra weeks. After he was healed, he fully intended to finish the journey that he had started. I met another motorbiker who went by the name of Bear, (Yes, we were Teddy and Bear) and an adventurous Aussie girl called Toni who gave me a good run for my money when it came to putting away wine. Many nights were spent with these guys and other people (too many to name!) having laughs and great times. 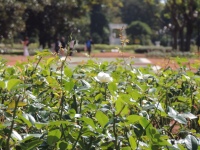 The tranquil parks of Palermo are a step back from the city.

Buenos Aires is a huge city, with the Greater Buenos Aires population stretching to a whopping thirteen million people. After São Paulo, it is the second largest metropolitan area in the whole of South America. The city itself is split into Barrios, each containing their own piece of individual Latin American culture. For example, Barrio Palermo exhibits beautiful parks, gardens, man built lakes and roadways. San Telmo is the barrio of tango, small European style cafes and a grand Sunday market, while affluent Recoleta is home to the grand cemetery containing the grave of Argentina's much-loved Eva Perón. 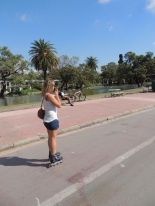 Just having a rollerblade!

Each of these places required at least half a day to visit and fully appreciate. My friend Johanna and I took a walk out to Palermo's rose gardens and paid an extortionate amount of money to hire some dodgy rollerblades – which is still totally cool in Buenos Aires! After twenty slow and painful minutes emulating Drazic from Heartbreak High, I was ready for my shoes again. The gardens themselves are simply beautiful, and standing in the midst of them makes it hard to believe you are still in the middle of the country's biggest city.

One of the mausoleums in Recoleta's vast cemetery.

We made our way across the city to Recoleta Cemetery and spent a couple of hours awestruck at the sheer volume and grandeur of the crypts and mausoleums dedicated to the bourgeoisie and landowning classes. The cemetery is so large that it requires a map to navigate the endless narrow passageways. I regretted not doing my research beforehand, as I later came to appreciate some of Argentina's most historical figures were lay to rest here.

Between days exploring the barrios, the city also offers its night-life. In traditional big city fashion, every night of the week there is somewhere to go and something to do. We spent one evening at the La Bomba de Tiempo (The Drums of Time), an improvisational drum group who incorporate several rhythms and influences into their production, you can read more about it here. Another night, we made a trip to a local restaurant and indulged in Parrillada, the famous dish of Argentinian meat. Coupled with a decent bottle of red wine from Mendoza, it is among one of the best steaks I have ever eaten, all for less than $20AUD! There are nightly tango shows for those wanting to learn a few moves themselves and there is a vibrant and affordable theatre scene, albeit mostly in Spanish. The highlight of my week was in a nightclub in Palermo that played a mix of English/Spanish rock music – they played The Strokes, not once, but twice, two times in a row!

The sun paints the sky behind the Obelisk on Av. Corrientes.

Wanting a taste of downtown Buenos Aires, I shifted to Hostel Suites Obelisk. It was a huge, ten storey building and although the staff were nice and the place was clean, the huge open common areas didn't make for the same atmosphere as my last hostel. I took some time to explore downtown during the day but probably didn't do it justice. Being much larger than Santiago, Buenos Aires also felt quite dangerous. Every second person I spoke to had a story of some kind, whether it was being pick pocketed on the train or robbed in the street. Desperate thieves have resorted to vomiting on unsuspecting people to distract them and steal their belongings while they apologise and 'help' clean up their mess. Nonetheless, the downtown area has its share of worthwhile monuments, among them the giant obelisk and the largest LED Coca Cola sign in South America, and Puerto Madero with its beautiful waterfront restaurants.

There are only two things left to write about. Firstly, my most nerve-racking moment in the city and secondly, by far the strangest afternoon I had during my time in Buenos Aires.

I'll start with the illegal one. Argentina is currently in the grip of major inflation, and the government is only paying ~5 pesos for the American dollar, rather than the official rate of 7.5 pesos. Argentinians are saving their money in American dollars to guard against the inflation of their own currency. This has led to a black market operating on the streets, where change vendors are offering up to 9 pesos per American Dollar (effectively nearly doubling your money!) Naturally, American Dollars are impossible to come by in Argentina, so I had been sure to bring some with me from Chile. Working on a tip, I found a shady office and enquired about the 'cambio'. I was ushered into a tiny elevator, past two locked doors into an empty room with a table and a calculator. I realised that in this room, nobody could hear me scream. Heart beating, palms sweating, I changed $400US and scrutinised every peso handed back to me – counterfeiting is a regular occurrence in Argentina. Limbs intact, I hurried back out the way I had came and onto the busy street, 30% richer thanks to ten nervous minutes. Success! 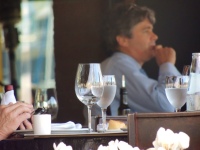 My strangest, most eye-opening experience however, was to be on Sunday in the crowded Palermo parks under the late afternoon sun. Myself, Kevin, Bear and Toni decided to take a lazy walk to see what all the fuss was about. Well, I'll sum it up for you in the final sentences of this post: thousands of people sipping Maté and eating picnics, the smell of suspicious smoke thick in the air, a fierce game of roller hockey (in the middle of the road!), children and adults careering in all directions on all kinds of questionable transport options. But my favourite, and someone that I will forever rue not taking a photograph of, was the 6″8, leotard wearing, long haired man clasping a castanet in each hand, standing in the middle of the street practicing the Flamenco. On rollerblades. 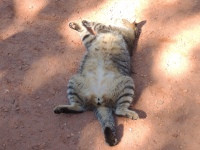 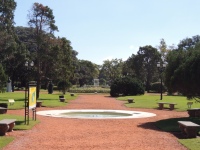 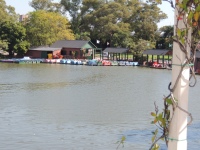 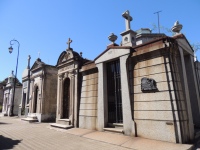 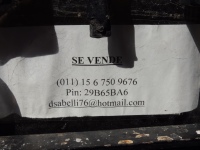 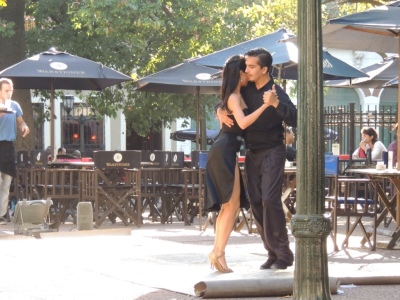 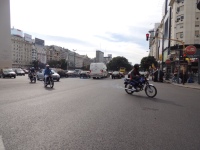 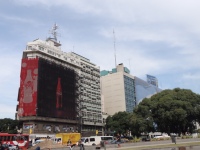