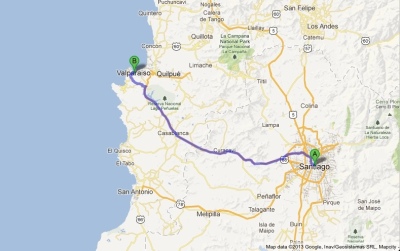 Valparaíso is a 1 1/2 hour bus trip north of Santiago and is a UNESCO World Heritage Site, meaning that there are measures in place to preserve the unique features incumbent in the buildings upon the hillsides, locally known as 'cerros'. It is still a fully functioning port for all types of import and export cargo, and runs 10km south of picturesque beaches at Viña del Mar.

When I planned my two day visit to Valparaíso I therefore expected to spend my time walking around the historic cerros, photographing the famous buildings and eating the local delicacy, alfajores. I even hoped to squeeze some time in to work on my tan down at Viña del Mar. Things didn't quite go according to plan.

I arrived in Central Valparaiso late on Thursday afternoon having caught the TurBus from Santiago (just 4000CLP, $8AUD) to the inner city bus terminal. Having booked my new hostel online I had made sure I made a note of the address before I left Santiago – but unfortunately I didn't have a map to accompany it. As students dont return to school until next week it is still high season in Chile. This meant that there were an extra couple of thousand Chileans to ogle me as I desperately navigated my way through the busy streets searching for a free map of the city.

I finally came to the steps of another hostel and, squeezing myself and my backpack through the door in hope of finding a map, climbed the stairs. “Quisiera un mapa, por favor” I said to the lady behind the desk, praying that I'd never have to stay in a hostel that looked like this one. “Si!”, she beamed. Yes! My Spanish was finally improving!

She led me through a few doors and up some stairs. Strange place to keep a map, I thought, but I obligingly followed her nonetheless. We came to a small attic room with a bed the size of a cot and a pile of seemingly unwashed sheets behind the door. The lady proudly motioned towards the stained mattress and enquired how long I would like to stay.

Ten minutes, some awkward hand signals and one free map later, I was back on the streets of downtown Valparaiso. The sun was beginning to set and the words ringing at the front of my mind were those I'd paraphrased from the guide book: “If you stay out after dark in certain parts of Valpo, people will find you, steal everything you own and you may die.” Perhaps I was exaggerating, but being alone in the middle of a foreign city, weighed down with everything you own and no idea of where you are is not a very nice feeling, believe me.

Luckily, my sense of direction adjusted, I found my hostel on the map and began to head towards my hostel. All that stood before me were roughly fifteen blocks and some of the steepest residential streets in Chile.

When I say steep, I mean steep. These streets are so steep that four wheel drives screech their tyres around the cobblestones corners to make it to the top. At some points i honestly felt as if I was walking vertically. Therefore, I simply can't tell you how much I laughed* when I arrived at my hostel, drenched in sweat, only to be told about the wonderful 'ascencores' (elevators) specially built to carry people from the bottom of the hill, to the top. Oh, and they're cheap too! 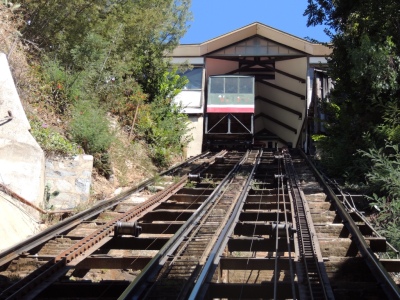 If only I had known about these earlier...

On the upside, my hostel 'La Casa Fischer' was a welcome break from the noisy streets of Santiago. A converted house, it is made up of three bedrooms: two four-share mixed dorms and a private room. The kitchen is homely and a welcome change from the larger (often dirtier) kitchens in larger hostels. The living room comfortably seats all of the guests, and there is a small porch area out the front for those who prefer fresh air.

Among the guests were a sarcastic Californian expat, two Irish girls and a romantic Pommy couple. After the first evening asking all of the typical hostel questions (Where are you from? How long have you been travelling? Do you have a pet?) and a day down at Viña del Mar beach (accompanied by a huge fire) on Thursday, we promptly decided it would be appropriate to drink a vast quantity of beer, wine and pisco and try our luck with the local nightclubs.

Let me tell you two things about karaoke in Chile: 1. It's a bad idea, 2. Anything involving Cher's If I Could Turn Back Time, karaoke or not, is also a terrible, tragic idea.

Only having one rather hungover day left to explore the city, I felt like I could have spent perhaps another day in Valparaíso. I did enjoy taking some photos as I walked around the city the next morning and took a Tours for Tips walking tour later in the afternoon, which was excellent. I took a boat trip from the harbour which was nice (2000CHP, $4AUD) but nothing to go crazy over. The street food is mainly empenadas and I think they're okay because I had one on Friday and I'm not dead yet. Always remember to use common sense with your possessions in cities like this, I had seemingly shocked people telling me that they had left their bag under a chair, unattended, out of sight, only for it to be stolen – who would have thought? Wear your bag on your front if you have to, and keep an eye out for anyone acting strangely around you. Better to look like a dork than to lose all of your possessions.

Enjoy the photos of this beautiful city, they were well worth the hangover. Lastly, check out the video of the downhill mountain biking that takes place each year in Valpo, it is totally awesome!

People in the Plaza O'Higgins: 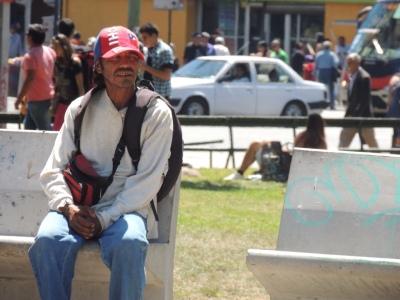 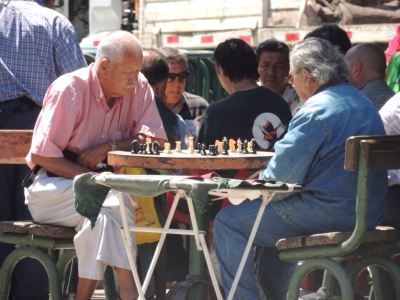 Views from the main port: 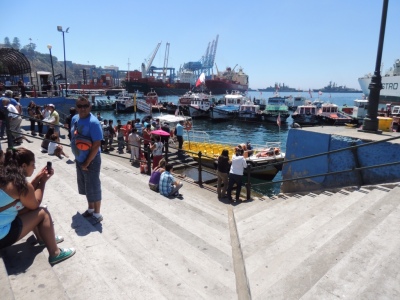 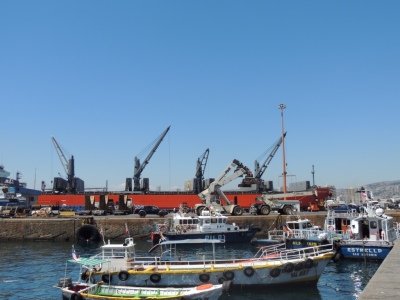 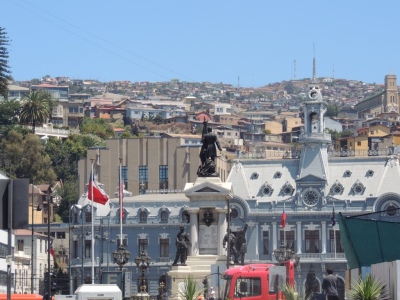 Some architecture and street art from what was once one of the wealthiest parts of Valparaiso, thanks to the Californian gold rush: 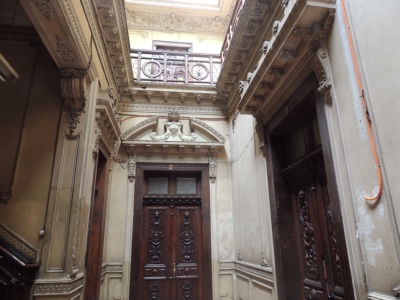 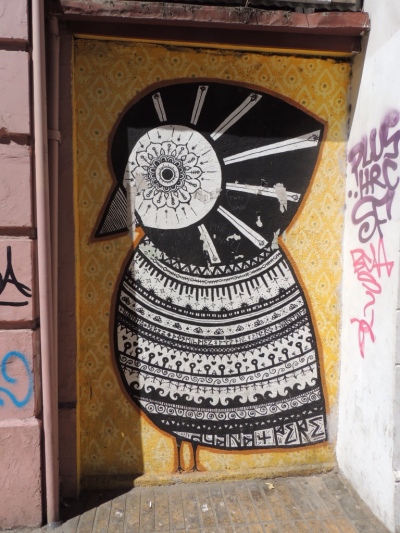 Looking back from the acsensore towards Alegre:

Views and art from the cerros of southern Valpo: 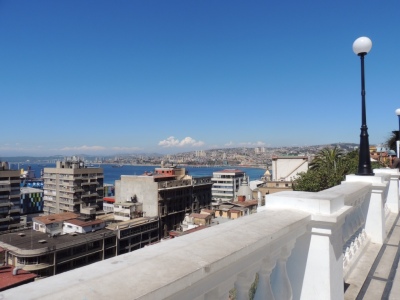 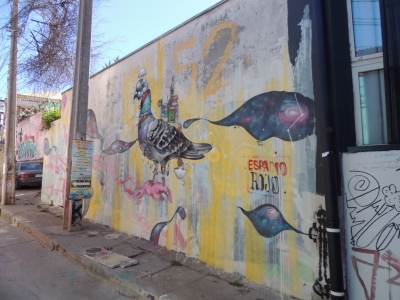 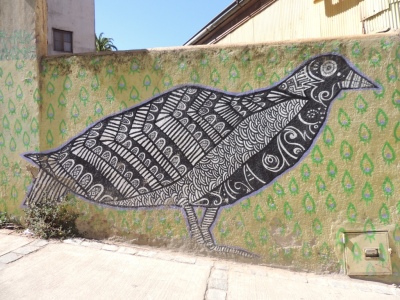 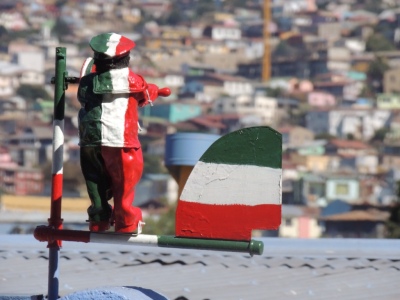 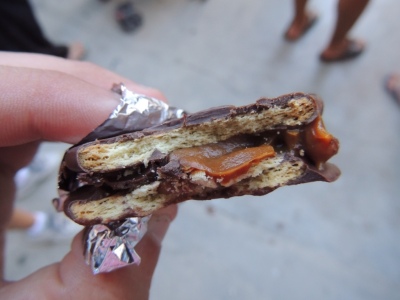 Looking back on Valparaíso from the bay, and the sunset from Cerro Concepcion: 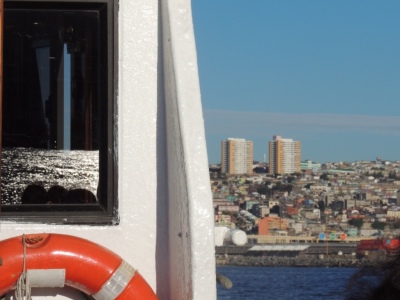 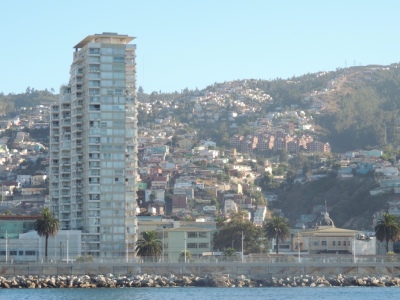 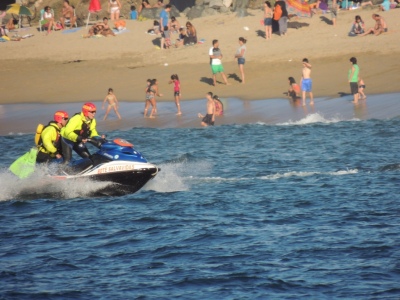 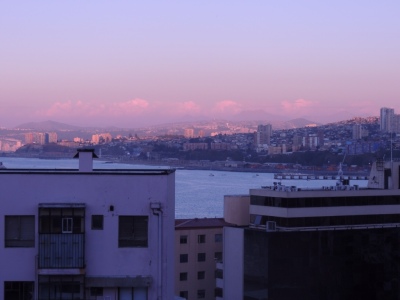